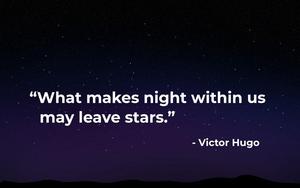 “What makes night within us may leave stars." -Victor Hugo

In 1819, famed poet John Keats wrote to his brother George, “Do you not see how necessary a world of pains and troubles is to school an intelligence and make it a soul?” This oft-cited quote is, in this internet age, usually divorced from its original intent and context.  The letter from which it is drawn was written in the wake of the passing of his younger brother Tom who, like Keats’ mother, had succumbed to Tuberculosis. One could argue that Keats, suspicious of religion in general and supernatural sentimentality in particular, attempted to find comfort and meaning by other means so as to make sense of a terrible loss. Keats casts a tragic figure, succumbing himself to “the fevers” only a few years later. While drawn to the “dark rooms” of life during his own, as evident in much of his work, Keats was no pessimist. Instead, he saw suffering as crucial to the development of individuality in his so-called “Vale of Soul-making.”

Keats draws on old wisdom, that we are made stronger by life’s trials. Helen Keller, who knew a thing or two about overcoming adversity, likewise opined, “We could never learn to be brave and patient if there were only joy in the world.” Both Keats and Keller valorize suffering, a recurrent pretense in the annals of Western thought. This notion in extremis belies the more important truth that most problems—those fertile challenges through which thought and action become generative—are less pronounced suffering than general discomfort; they are near term inconveniences with available, if not always immediate or obvious solutions.

While I am no advocate of suffering (I avoid it whenever possible), I am all for a healthy measure of discomfort. As an educator, I believe the best and most profound learning happens when we put kids in new, often uncomfortable situations.  The familiar is pleasant, but rarely yields much of importance, especially in terms of learning and learner outcomes. We “school an intelligence and make a soul” by introducing our students to meaty, asymmetrical, and relevant problems drawn from the world and imbued with practical and ethical implications.  And then we throw them in to this intellectual pool and challenge them to swim, to self-advocate, to overcome doubt, to adapt. Growth is hard: social, emotional, intellectual. It’s also where big learning, all the really good stuff, truly happens.

As adults, we may feel real and imagined pressures to swoop in and “save” our children from even expected, developmentally appropriate discomforts.  But there are critical rites of passage through which we all individually must travel, from sandbox disagreements to unrequited love, dashed hopes to the vagaries of circumstance.  Life involves a few hurts, stitches and slights. It involves a fair measure of disappointment. It is in these moments of challenge that we learn who we are and that for which we stand. It is in these moments when we learn to rise, to set goals, to persevere.  There will be tears along the way. No matter.

Are your children subject to the winds, tossed about in otherwise forgiving seas, or do they adjust their rigging and turn into the gale and surf? Do they give in to life’s pressures, or do they thrive on them? Our job, as parents and teachers, is to ready our children for launch. The only meaningful question—are they? What personal strategies do you discuss with and model for your children so that they are prepared to handle the hard days?  As you consider this question, it’s important to remember that support is no synonym of coddle, nor is empathy synonymous with sympathy.  As parents, we can listen and advise without interfering. We need not die emotionally on their every hill.

The kids, as they say, will be alright. Even if we lose a little sleep (or a lot)!