Preschool Program at The Baldwin School of Puerto Rico 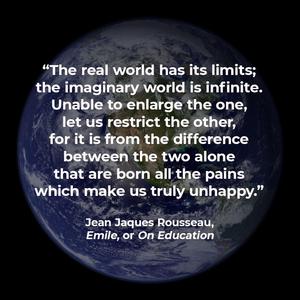 “The real world has its limits; the imaginary world is infinite. Unable to enlarge the one, let us restrict the other, for it is from the difference between the two alone that are born all the pains which make us truly unhappy.”

The nationally reported college admissions fiasco is, I suppose, some sort of news? Those of us on the frontlines of this annual process are, sorry to say, only shocked that these types of behaviors have taken so long to come to light, especially in the age of digital memory. This scandal exposes a system wherein numerous individual and institutional intermediaries profit from placement; a system that reeks of inconsistency and favors privilege. Should we be shocked? Not really. Should we condemn the unfairness and illegality of it all? Absolutely.  Ethics and laws are the bulwark in an otherwise amoral, ‘ends justify the means’ world—one whose historic arc bends sharply towards inequity. Kids deserve better of their adults.

The ‘Varsity Blues’ scam is a symptom of a broader problem, one borne of social media, shifting norms, and, dare I say, changing priorities in parenting. Social media, for all its power and possibility, negatively impacts childhood and undermines human emotional and social development. Social institutions that once reinforced community values, ethical boundaries, and positive behaviors, are either in crisis (e.g. far reaching legal and moral scandals, etc.) or free fall (e.g. decline and/or disappearance of community-based organizations, etc.). While these factors certainly exacerbate conditions, radical shifts in parenting over the last two generations better explain last week’s happenings.

In modern English, sympathy means to share the feelings of others. Empathy, on the other hand, means to understand the feelings and experiences of others without necessarily sharing those feelings or having had those experiences. Whereas Western-influenced parenting over much of the last two centuries trended towards empathy with regards to addressing the needs of children, recent parenting trends towards sympathy.  This is no small difference.

For example, when I was a child, I would share my feelings and concerns with my parents. They would hear me out, perhaps make recommendations, even role play choices. Rarely would they intervene or take sides, and then only if the seriousness of the situation warranted intervention. Their goal was to help me learn to solve my own problems and grow to be resilient. I suspect many of you received similar parenting growing up.

As parents of children in the 90s and 2000s, my wife and I trended somewhere between the poles of empathy and sympathy, indulging more often than we should have, especially in so far as our youngest son was concerned (he’d agree). We didn’t necessarily rush in to save our children, but we definitely worked to make sure that their landings were soft. We now question the wisdom of our parenting, and whether our approaches, well-intended as they were, stunted our children’s early adulthood.  While we have good kids, our children are far more dependent on us than we would like; than my wife and I were on our parents.  Our boys should have had a few more hard landings along the way.

Contemporary parenting has a preoccupation with protecting children from disappointment, sometimes at all costs. See participation trophies, debates over grade points and starting lineups, meddling in peer-level relationships, or the over-usage of loaded terms like bullying to describe otherwise routine developmental patterns of socialization. In some cases, unintentionally, parents teach their children victimhood.  Childhood is a proving ground for adulthood.  Tears are part and parcel of growing up.  We cannot and should not insulate children from the world. They must be prepared for stress, for dismay, for failure, for regret, just as we prepare them for success. Otherwise, and we’re seeing this in millennials, adulthood will be more than they can bear.

I’ve written before of the fears that often drive modern parenting. Some of these fears are grounded in fact, e.g. the outsize and potentially detrimental role of technology and social media in the lives of children, or the relationship between poor nutrition/limited physical activity and serious health issues like childhood obesity.  Other fears are exaggerated or unfounded, egged on by sensationalist media, questionable sources, and internet trolls, e.g. the causal relationship between vaccinations and cognitive disorders or the notion that our children will necessarily have fewer opportunities in their futures.  Fed a steady diet of fear, we are primed to save our children when we should be teaching them how to save themselves. Let them earn the right to be the heroes of their own stories.

Most disappointments in childhood are small. But each of them represents an opportunity—to develop self-management, self-advocacy, empathy and perspective. In time, with just enough coaching, these opportunities for growth add up to resiliency.  In this way, when a young person is finally faced with disappointment on a grander scale, e.g. the EA/ED deferral in college admissions or the promotion that never materializes, they don’t fall off a cliff.

The failure of the parents caught up in the college admissions scandal stems from their belief that it was more important that their children be given every opportunity than those opportunities be earned. This belief is ultimately debilitating. Furthermore, they taught their children that values and fairness don’t matter. At what moral cost? We have to fall down sometimes. We have to be told no. We have to experience failure. We all need a little scar tissue in our lives. This, as it turns out, is called learning, an essential part of growing up, and the wellspring of wisdom.