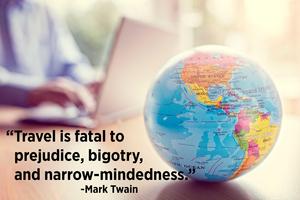 “Travel is fatal to prejudice, bigotry, and narrow-mindedness.” - Mark Twain

World War II officially ended on the deck of the U.S.S. Missouri in Tokyo Bay on September 2, 1945. At the time, General MacArthur, commander of ground forces in the Pacific Theater, poignantly challenged, "Let us pray that peace be now restored to the world and that God will preserve it always." World War II alone claimed 3% of the world population. The first half of the twentieth century bore witness to an unparalleled economic depression, the largest pandemic in human history, and two world wars—accounting for more than 100 million deaths combined and resulting in horrendous physical, cultural, and moral destruction.

In the aftermath of World War II, there was a concerted effort by numerous nations of the world to rectify as many errors as possible, especially those that led to or exacerbated conflict. So too to expand education, improve infrastructure and health care, and institute a series of social safety nets to protect the most vulnerable. This so-called post-war Liberalism, not to be confused with casual political usage of like-sounding terms, led nations to develop a number of international/multinational institutions, e.g. the World Court, the United Nations, the World Health Organization, NATO, the European Union, etc., to ensure that the calamity of the 20th century would never happen again. In the decades since, a fair-minded assessment of these efforts must note both the successes and failures of these institutions, long on promises but short on deliverables. In the current state of political affairs, it would be easy to conclude, albeit cynically and unfairly, that the post-war project has been a lesson in failed promise. For all the political hyperbole and considerable flaws in bureaucratic execution, the noble sentiment that we are stronger together is still true, and a worthy ambition even when we fall short.

The International Baccalaureate Organization was born in the post-war period and subscribes to this same optimism. At its heart is “International Mindedness”, a fuller exposition of the importance of cultural understanding in a global framework. International Mindedness is more than intercultural study and language acquisition. It is a mindset that seeks to understand without prejudice; that builds capacity for empathy, stewardship and genuine expressions of compassion for others. It does not command conformity of opinion, nor does it promote cultural relativism. International Mindedness allows us to deeply disagree about our fundamental values and beliefs and still honor our shared humanity. It is, in a word, an ethos of peace and inclusion.

To quote Asimov, a favorite writer of my youth, “(our) assumptions are (our) windows on the world. Scrub them off every once in awhile, or the light won't come in.”

See you around campus.
Print