Preschool program at The Baldwin School of Puerto Rico 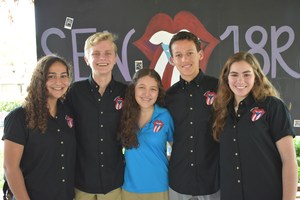 Ana Leonard, Jorge Pérez, Alexandra Piñeiro, Diego Álvarez, and Margarita Pertierra
We are proud of you!
We are extremely proud of our 5 nominees to the United States Presidential Scholars Program!
About the program:
"The United States Presidential Scholars Program was established in 1964, by Executive Order of the President, to recognize and honor some of our Nation's most distinguished graduating high school seniors. In 1979, the Program was extended to recognize students who demonstrate exceptional talent in the visual, creative and performing arts. In 2015, the program was again extended to recognize students who demonstrate ability and accomplishment in career and technical education fields. Each year, up to 161 students are named U.S. Presidential Scholars, one of the Nation's highest honors for high school students. The Scholars represent excellence in education and the promise of greatness in young people. In honoring the U.S. Presidential Scholars, the President of the United States symbolically honors all graduating high school seniors of high potential."
Print