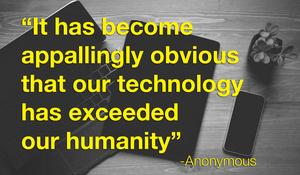 Clayton M. Christensen of Harvard University coined the term disruptive innovation in his best-selling book, The Innovator’s Dilemma (1997), to describe a complex process by which products and solutions overtake preexisting ideas, practices and technologies, often by filling voids or creating markets where none existed.  Innovators often live on the periphery of business and technology, though this is not always the case.  Apple, Inc. is a great example of an established multinational that also created a so-called ‘new market foothold’.  Leveraging and reimagining the internet (including IoT), emerging media, intelligent design, and their own proprietary systems and hardware, Apple transformed how information is created and shared by anticipating, some might say insinuating, needs, and therefore markets.  The ubiquitous smartphone is now a staple of modern life, and a harbinger of innumerable other gizmos, gadgets, and applications.

Innovation, and its bedfellow technology, are, almost by definition, disruptive. While they solve one set of problems, they generate many more. The internet gave rise to our “information economy”. Smart phones and other technologies, coupled with the advent of social media, completely changed the way we communicate, share complex information, even socialize.  Together, they transformed the world, and not always for the better.

In the wake of all this innovation and disruption, there is collateral damage, some of which we have yet to realize. Schools are now both intersection and battleground for critical discussions about the role of these technologies in the lives of children. Part of this discussion revolves around the obligations of schools and parents in providing and monitoring the use of technology, and of managing the darker impulses of pre-adolescence and adolescence.  These technologies are powerful tools for learning. They are also objects of distraction. At worst, they allow for anonymous behaviors that make most of us recoil. They allow for ready access to the taboo and mean, to the crude and hateful.  They promote tribalism and bullying.

Whereas prior to the rise of social media, of internet 2.0, one could make a case that access to cell phones helped kids stay safe, the same is not so clear now.  But it’s not just about cell phones.  Unmonitored, all those short duration shares and uploads, all those hidden in plain sight texts, all those 2am “you thought they were sleeping” verbal melees that continue on into morning, all those emoji-filled ALL CAPS rants, have real effect and consequence.  The American Journal of Epidemiology, the Proceedings of the National Academy of Sciences, the Proceedings of the Royal Academy of Sciences, and the Journal of Pediatrics have all published studies on the negative effects of social media and too much screen time.  Internet Addiction was even proposed as a disorder in the most recent update of the Diagnostic and Statistical Manual of Mental Disorders (DSM-5).  Children and adolescents are especially vulnerable during critical developmental stages.

While our firewalls are firmly in place to govern and monitor internet access via our systems, they do not govern your cellular/data plans, which act as surrogate and go around from our protections.  These are simply beyond our control.  We see too many bad on-line choices, especially among the newly initiated in upper elementary and middle school. Frankly, the bulk of our disciplinary responses begin with choices launched in cyberspace. While we are working to eliminate cell phone usage among elementary and middle school students throughout the school day, we can only do so much.

It is incumbent upon all parents that you take control of your child’s online experience. Their safety and positive moral development supersedes any implied right of privacy, no matter how much they might howl and groan. More and more, parents are legally liable for the actions of children where harm is found to have occurred, including online. I strongly recommend that you install and activate parent controls on all cellular and wireless devices and monitor screen time.  I strongly recommend that for all children under the age of 14, that you collect these devices before you head to bed each night. Set a nightly turn-in time for phones, laptops, and tablets. Finally, you bought that phone and pay for all that access. You have every right to establish usage rules and family expectations for online behavior.  You also have every right to see what your children have been up to while surfing!

The world is a complex place. Your children need you now more than ever, no matter how much they might protest.